Triangular head (noticeably larger than the body) .  Head is distinguished by two dark stripes, one on each side of its face, which run diagonally, like Zorro’s mask, from its eyes back to its jaws.

Thick, dull (not glossy) body.  Back is lined with dark diamond-shaped blotches outlined by lighter-colored scales.

Basic color ranges from brown to gray to pinkish, depending on the shade of its habitat.

Tail blunt with one or more rattles (except babies).  Tail is circled by several alternating black and white bands, like the pattern of a raccoon’s tail.  These patterns are most distinctive when the snake is young and are more faded, blurred and camouflaged when it is older.  Generally travels with tail pointed up.

Average adult measures 3-4 feet long, but there have been reported in 6-7 feet in length 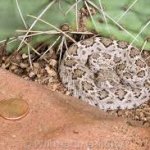 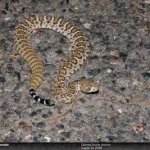 * Have more potent venom than adults, short fangs and are dangerous  from birth-more so than adults.

Although they are typically found among cactus, mesquite, rocky terrain, and thick brush, they can also be seen on hiking trails, neighborhood backyards, gardens, flower beds, playgrounds, and patios. Rattlesnakes are cold-blooded reptiles, which means they rely on the environment to regulate their body temperature. In the winter they den together is cooler. During the heat of the day they seek cooler locations such as under rocks and logs, in flower beds where there is ground cover, in overgrown vegetative areas. They need food and water to survive. With the recent droughts they are traveling into areas for the water source such as neighborhoods and pools. Trash piles provide refuge for many vermin such as rats and mice, which are prey for rattlesnakes attracting them to those areas.

The rattlesnake does have eggs, but the eggs are carried inside the female’s body. Once the eggs are fertilized, they are carried for approximately 167 days. The eggs hatch inside the rattler’s body, then she gives live birth to her young. A reproductive system of this type is called ovoviviparous. The female rattler may carry from 4 to 25 eggs. An average of nine or ten young are born live. A female rattlesnake usually reproduces every 2 or 3 years. Young are usually born August and October. The newborns are born to survive on their own, usually measuring only 10 inches long. There is no maternal nurturing, so the young are faced with immediate threat from predators, unfamiliar location, need for food and water and vulnerability. When threatened they throw themselves into a defensive pose and strike repeatedly. Their venom is 10 times more potent then adults.

The western diamondback can climb small trees! They can swim! Like other rattlers, the western diamondback takes up residence among communities of small mammals such as prairie dogs, rabbits, gophers, chipmunks, ground squirrels, mice and rats. They usually hunt at night using an ambush technique.While it is unusual, the prey of a rattlesnake need not necessarily be alive for it to serve as a meal. Prey size is largely determined by the size of the snake.

Western Diamondbacks, like most other rattlesnakes and other venomous snakes in the pit viper subfamily, have hemotoxic venom. “Hemotoxic” means blood-damaging, but the chemicals in the venom target all sorts of tissues, not just blood. Rattlesnake venom contains a whole cocktail of damaging chemicals, primarily proteins and enzymes. A common set of components are proteins that mimic the proteins in our blood that produce blood clotting (prothrombin, thrombin, and other procoagulants). Western diamondback rattlesnakes’ venom disrupts the formation of clots, so that no clotting is possible. After the clotting factors are either all used up or disrupted, a separate set of chemicals known as hemorrhagins takes effect. They damage the inside walls of arteries and veins. Since clotting is not possible, this leads to massive, uncontrolled bleeding into the tissues. Among other problems, this will disrupt the delivery of oxygen to tissues by the blood. Without oxygen, the tissues in the affected area will start to die.

For hiking a standard hiking boot that covers your ankle is good. Snakes can strike high, so these will provide minimal protection, but better than open toe or tennis shoes.

For hunters purchase the correct type of boots. Any sportsmen or department stores in your local area or an online retail store will have these available for purchase. The boots need to be at least ankle high. High boots that go to the middle of your calf are ideal, such as cowboy boots. The footwear should be made of thick material, such as leather or hide. If you are walking through thick desert brush, boots that reach your calf may give you more protection than ankle-high footwear.

Buy sturdy pants. You will need to wear a thick material such as denim. NEVER wear shorts or a dress while walking through rattlesnake country. When these creatures strike, they can reach as high as your thigh. Before walking into the rattlesnake territory, tuck your pant legs into your boots. This will give you added protection in case the strike penetrates your boots.

Buying chaps are optional. If you are wearing calf high boots and tuck in your pant legs, chaps are not necessary. However, if you are wearing ankle footwear and do no want your pants tucked in, chaps are an alternative. They wrap around your calf area and are made of thick leather. A rattlesnake most likely not be able to penetrate this.

Be AWARE and take precautions:

Rattlesnakes will typically give you a warning… the familiar “rattle” sound. If you hear the sound remember SLB.

S—STOP in your tracks (remember the snake WILL strike if it feels threatened or snored). Snakes use vibrations to help them locate their prey. If you run (which the first instinct we have) this could cause the snake to strike.

L–– LOCATE (visually) the snake (IMPORTANT to know how much to move AWAY from it rather than toward it). As long as you remain still it is unlikely the snake will strike. Rattlesnakes are aggressive and will not hesitate to strike if they feel threatened. They can lunge up to two thirds the distance of their body length!

B––BACK AWAY very slowly and try no to panic(remember is is giving you a warning to leave, so get as far away as you can). The rule of thumb is take FIVE giant steps backward keeping the snake in your field of vision. This should allow you to move out of striking range. After you are at a safe distance away, quickly get away. Please remember to tell others about the snake to help prevent others from being bitten.