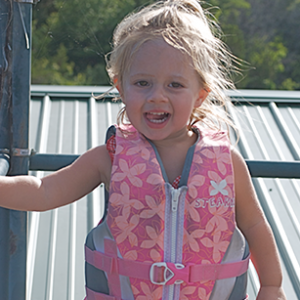 Peyton Alexandra Hood, my niece, was born on September 1, 2008.  From birth there was something unique and “special,” in the way Peyton captured people’s hearts through her personality, love of life and energy.  On August 10, 2010, while playing on a swing set at our family’s lake cabin, Peyton was bitten on the ankle by a newborn Western Diamondback rattlesnake.  Ultimately, she was taken by care flight to Cook’s Children’s Hospital in Ft. Worth, Texas, where she died five hours later.

This tragedy struck right at the heart of our family.  As therapy, I began researching rattlesnakes.  During my research, I discovered that medical science had discovered a way to use rattlesnake venom for medical advancements.  With this encouraging discovery, Peyton’s Project was born.  It became our mission to raise venomous snake awareness to protect others from a similar fate.  With the medical advancements using the rattlesnake venom, these snakes can provide a positive purpose.

Our MISSION is to educate the public on the reality and danger of  venomous snakes and provide resources to support related medical advancement.

Our VISION is to continue to develop and educate through programs custom designed to meet the various age groups, industries and general public’s needs. In the future we plan to become a resource center for victims and the general public to contact regarding venomous snakes. We also plan to assist and collaborate with medical research and advancements using the rattlesnake venom.

What a great event we had! Thank you to all who attended, volunteered, donated raffle items, and helped support this amazing organization.

Thank you to Peyton’s Project Board of Directors for your continued efforts to support our mission and continue to impact our wonderful community.

Wynn Varble was our performer this year, and he did NOT disappoint! The audience enjoyed his music as well as the stories he told. Thank you, Wynn!

Thank you to all of our partnering hospitals and URHCS for participating in our Antivenin Program!

Thank you all for your generous support of our efforts!